Today, during the Walt Disney Company’s earnings conference call, CEO Bob Iger announced a new Star Wars trilogy! Rian Johnson, director of “The Last Jedi,” will be developing this new project that will be separate from the stories about the Skywalkers.  When Disney bought Lucasfilm in 2012, they had a very specific vision, so they wiped out the Star Wars novel canon. Uber fans were pissed because of the great stories that were eliminated, such as The Thrawn Trilogy, Darth Plagueis, and the Darth Bane Trilogy. Johnson is described as a Star Wars nut, so the hope of something new being brought to the big screen are finally becoming a reality. The Star Wars fan base will undoubtedly go apeshit over this announcement, and rightfully so because it sounds badass. If you haven’t read the old novels check them out here! 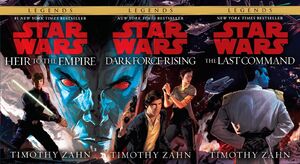 The Internet DIDN’T HOLD BACK after the BOB CHAPEK Firing at DISNEY.