Skip to content
Home » The Last Jedi: The Force is Meh with This One

The Last Jedi: The Force is Meh with This One

This article is part of our series called, “A Spitting Match,” where two of our writers go head to head. Read the rebuttal by Pat Neistat here.

“This is not going to go the way you think.” – Luke Skywalker

Oh hey! Another review of The Last Jedi that starts with the same lazy quote that you’ve read in every other review, only this one is going to be different. I’m here to share my non-corporate thoughts on the latest Star Wars installment. Who am I to share these thoughts? I’m really no different than you. I grew up playing with my Star Wars toys, throwing away a fortune when I ripped them out of the box. I ate Kellogg’s C-3PO’s for breakfast and I cuddled with my stuffed Ewok when I went to sleep. I’ve seen each of the original movies dozens of times and still can’t get a single question right in Star Wars Trivial Pursuit. I once sang “Baby Got Back” during karaoke night at a lesbian bar while wearing a Jar-Jar mask. I got a standing ovation! I love the movies, but I don’t worship the Star Wars universe. I have no idea who Mara Jade is and I won’t apologize for it. My exposure to Star Wars exists solely in the eight movies that have been released as well as the two (horribly underrated) Ewok movies. If this kind of approach suits your fancy, please proceed to find the spoilers that you have been looking for.

I went to a midnight show on opening night and I spent the weekend trying to pinpoint just where the movie went south for me. I think it was a pretty steady decline until about midway through the movie when there was a steep drop. The opening dialogue between Poe and Hux read like something ripped out of one of these ridiculous comic book movies that keep showing up every couple months. I half expected Chris Pratt, Chris Evans, Chris Hemsworth and Chris Pine to show up as well. (I had to Google the last names of all these guys)

The back-and-forth between Poe and Hux, with Poe’s continued insistence on calling him “Hugs” was only trumped by the ridiculous Porg joke made at Chewbacca’s expense. Did you miss it? Let me enlighten you. Chewy, who was relegated to nothing more than a bit player for this film, has his big moment when he’s sitting at a fire trying to eat some food. He’s apparently roasted a Porg, and this upsets Porg No. 1 who yells at Chewy. Chewy yells back. Then Porg No. 2 yells at Chewy. Chew yells back. Then Porg No. 3 looks scared to death before still yelling at Chewy. Chewy yells back. Scene.

As much as Chewy was overlooked in the film (I desperately wanted more interaction between him and Luke…and I still don’t know why Chewy sprints past Leia after returning from Han’s death in TFW), the Porgs were even more useless. Say what you will about Jar-Jar and the Ewoks, they at least had a role in the Phantom Menace and Jedi. The Porgs yelled at Chewy, somehow climbed into the Falcon’s cockpit…and that was it. Is that enough to warrant an entire line of Porg-themed toys? Apparently.

Staying on Ahch-To for the moment, I’m completely fine with Luke being a curmudgeon when Rey shows up. I didn’t have any problem with their interactions and I enjoyed watching the two characters play off of each other. I’m not sure I needed to see Luke milk a whatever-the-hell-that-was, but it showed that Rey was following him all over the island. He finally came around and started training her and it was the one part of the film that truly worked for me.

Let’s get back to the parts that didn’t. Kylo senses Leia and doesn’t pull the trigger. We think he’s continuing to turn the corner after he ditches his mask, gets verbally assaulted by Snoke and then doesn’t kill Leia. Moments later Leia, and the rest of her Resistancers are blown to hell by TIE Figher pilots that aren’t worried about killing their lone surviving parent. Somehow, and this is the part of the movie where I lose my mind, Leia’s body is completely intact while everyone else is long gone. Then Leia suddenly turns into Mary fucking Poppins and starts floating through space. Yeah, she’s using the Force and all that, but the visual was absolutely horrible. I get that Carrie Fisher recently died and that the movie is dedicated to her and you’re not supposed to say anything bad about the precious General Organa, but that scene was absolute horseshit. It was to me, the single most insulting scene in the Star Wars franchise, and this comes from someone who sat through two movies of listening to Hayden Christensen’s dialogue. The movie never really recovered for me after this scene. It was the Fonz jumping the shark, it was the Saved By the Bell kids going off to college, it was Jeff Goldblum suddenly having a daughter in Jurassic Park: The Lost World, it was Aaron Sorkin leaving The West Wing! It was nonsense. 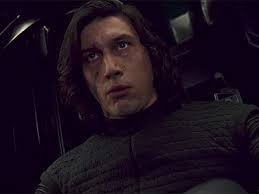 When casting information first came out for The Last Jedi, powerhouse names Benicio Del Toro and Laura Dern were attached. Dern’s Vice Admiral Holdo seemed like a fish out of water the entire time. She keeps her plan hidden from Poe the entire time despite there not really being a reason to do so. She gets a “big” moment where she kamikaze’s her ship into The First Order’s ship, but that moment was visually appealing and nothing else. My needle didn’t move at all when Holdo died. THIS is where I wanted Leia’s big moment to be. If Leia makes this move, it resonates. I knew Holdo’s character for 20 minutes and felt no loss when she made her ultimate sacrifice. If Leia is the one who does this, amazing moment in the film.

As for Del Toro’s DJ, what the hell was the point? I mean, what was the point to the entire Canto Bight subplot? Sure, you needed Finn to do something worthwhile, so now you introduce Rose (who was a halfway decent character) and they go searching for someone who isn’t even DJ. This also seemed like a lazy way to get Maz Kanata back in the movie. What was she doing anyway? The Canto Bight subplot was prequel-level bad. Much like Holdo, by the time DJ turned on Finn/Rose, it didn’t even move my needle because I had nothing invested in him. This all leads us to Finn and Phasma having a “showdown.” Another weak part of the movie. How did Phasma return from the trash compacter in TFW? Talk about another wasted opportunity for an excellent actress. I guess thanks for showing us her eye for a beat, but Phasma will go down as one of the most-hyped and under delivered characters in Star Wars lore.

I’m jumping around now, but so did The Last Jedi. Suddenly Rey gets the epiphany that she can save Kylo Ben because they touched each other across the universe. Now we’re getting somewhere! Finally we’re going to get the two big answers we’ve been awaiting for two years. Who is Snoke? Who are Rey’s parents? I’m willing to disregard all of the earlier flops of this film if just these two points pay off.

Nope. Snoke gets killed off quicker than Dooku in Revenge of the Sith and somehow this powerful supreme leader doesn’t even see it coming. Rey’s parents are nobodies, which is fine, but the scene seems like such a throwaway that it doesn’t even seem like it can be real. I was so disappointed in the execution of these two major plot points that it buried any emotion I could have for the remainder of the film.

Leia is back from the dead and she’s holed up with the remaining Resistancers and here comes the bad guys in an assault reminiscent of Empire Strikes Back. Only here comes Hologram Luke to save the day! The entire movie could be brought back to the light if only it delivers an epic battle between Kylo Ben and Uncle Luke.

Nope. More of the same. Stalling. The entire movie is about stalling. Poe stalling Hugs at the beginning. The Resistancers stalling the First Order in the middle as they run out of gas. Uncle Luke stalling Kylo Ben at the end. This movie was a lot of ‘Hurry Up and Wait.’”

The good guys get away because Rey has learned the Force allows you to “make things float.” Kylo gets schooled by a hologram, which I’m sure Hugs will let him know about in the First Order mess hall soon enough.

The movie ends with a random kid back on Canto Blight talking up the legend of Luke Skywalker. In full disclosure, I spent the closing moments of the film listening to the musical cues to try and figure out who this kid was. Either I closed my eyes for a second, or reached for my last piece of popcorn, but I missed the moment where Jake Lloyd Junior grabs a broom using the Force. I’ll admit it was a pretty big miss on my part and it left me very confused as to why we finished the movie on this kid. It didn’t ruin the movie for me, but it was a black licorice cherry on top.

I wanted to love The Last Jedi as I walked into the theater. I walked out and immediately read every review I could find, trying to see if I missed anything (obviously Broom Boy). I’m shocked that people loved this film as much as they’re saying they did. I’ve had countless conversations with people who have said they love it because it shows that anyone anywhere can be important in the story; that truly anything can happen at any time. Fine. Let me know how much you love the next NFL game you watch when someone comes out and shoots a 3-pointer with a 3-2 count during a power play.

What I enjoy about Star Wars is the battle between good and evil, light and dark, and getting to know our beloved characters as they “learn their place in all this.” Going into The Force Awakens, I only cared about Luke, Han and Leia. Coming out, I couldn’t wait to learn more about Rey’s lineage and discover more about Finn and Poe. Now that I’m coming out of The Last Jedi, I actually have no idea where the story goes from here. I really have no questions that need answers, or should I say, there are no questions in which I care about the answers. Rey and Kylo Ben are going to have a showdown at some point. Woopie doo. There’s nothing that indicates to me that Kylo can beat Rey. There’s nothing that indicates to me that Hugs is smart enough to win a major battle. I was counting down the months, weeks, days and hours until The Last Jedi came out. Now I can’t even count that I’ll go see the next one.

(Edit – Who am I fooling? I’ll go see the next one the night it comes out. Matter of fact, I’m going to see The Last Jedi again after I hit send on this. I just can’t believe the movie was as bad as it appeared on first watch. Maybe I’ll see some things that will change my mind. Here’s to loving it so much that I fall asleep with my stuffed Porg later on tonight.)

What’s Next for Epcot?

The Sunshine Flyer – Worth It?